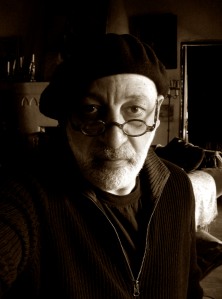 Astral House: (Architect Brent Saville – 1995)  These shots were featured in The Huffington Post,  Curbed LA and will appear and April 2013 issue of MrPorter.com – a division of Net-a-Porter – in an article on Modernism in Los Angeles.

Billboards: I took some night shots on the Sunset Strip and replaced the Billboard images with my own.

Monochrome: These are mostly taken with my iPhone – the camera I always have with me.

David George is a resident of Los Angeles, California. A writer, filmmaker, photographer, songwriter, voice over artist and 3 time dual citizen of the US, UK & Canada.

His documentary The Battle of Little Sayler’s Creek air regularly on The Documentary Channel  .

His recent collaboration with Grammy nominated composer Michael Hoppe has yielded a collection of songs that have been recorded by AnnaTebot Lee and released in S Korea – in Korean!  AnnaTebot Lee translated David George’s english lyrics into Korean. Several songs are on the S Korean charts.

“Nightingale”, a collection of songs by Grammy nominated Composer Michael Hoppé, with Lyrics by David George – performed by Giuditta Scorcelletti & Alessandro Bongi, will be released on April 14th, 2015 in the United States on Spring Hill Records/Linus Entertainment.

Michael Hoppé’s 25 plus instrumental albums include the Grammy nominated CD “Solace”. This will be the first time lyrics will be featured alongside Michael Hoppé´s timeless and beautiful music.

Former A&M Canada recording artist, David George, was delighted to add lyrics to many of Michael’s melodies – some newly composed and some more familiar which Giuditta’s  naturally sensual vocals bring to life.

With Michael Hoppe in San Miguel de Allende, Mexico; David George in Los Angeles, California & Giuditta in San Gimignano, Italy, the unique guitar stylings of Allesandro Bongi with a variety of talented International musicians made this real-time collaboration possible in the age of the Internet.

Michael Hoppé and David George invite you to listen to Giuditta and the songs of the  “Nightingale”.